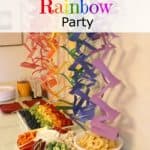 When our daughter turned 6 we celebrated it with a fun Rainbow theme birthday party. I spent more time than I want to admit looking for ideas and inspiration for the party. I thought I would save you the hassle and share my 10 ideas for a RAINBOW-themed party! 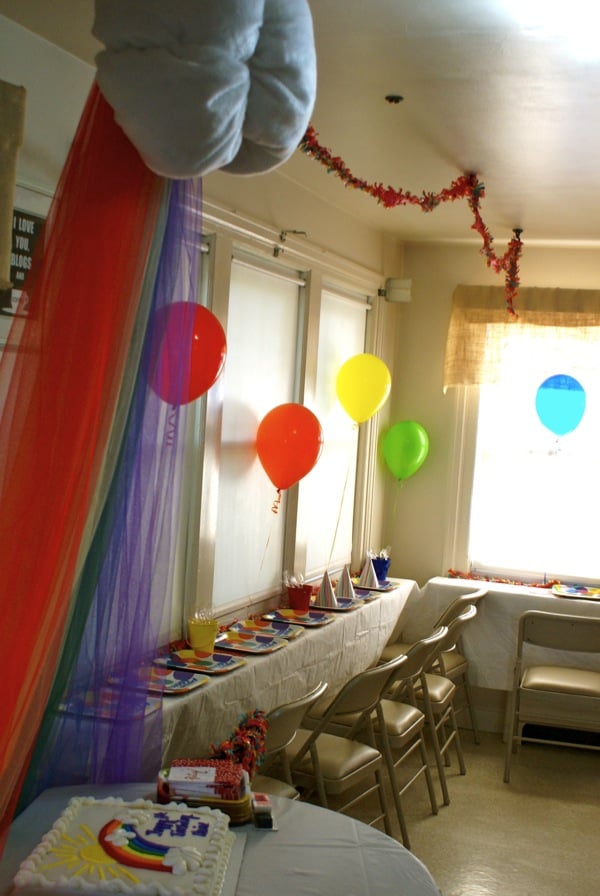 To make the cake table extra special I made this fun rainbow background.  It took about 1 1/2 yards of each color tulle.  Then I bought some soft white fabric and polyfill to create a cloud. What I loved about this project was how simple it was and that it was a NO-SEW project! I just wrapped the top of the bunch of tulle with an elastic band. The cloud was created with a white ribbon and a few safety pins.  All of the fabric can be reused really easily!

Inspiration for the Tulle Rainbow Backdrop was found on Icing Designs.

I made a simple and sparkly banner using scrapbook paper and a Cricut machine. Super simple to make and it will hang in Claire’s room after the party. This cheap rainbow decoration idea was a keeper! You’ve got to love a traditional pennant!

These were so easy and look so fun when finished. I followed the tutorial HERE and used large sheets of construction paper.

Sometimes simple is best.  We took single balloons and taped them in front of each window in our sunroom.  The wide window sills were used as a table for the kids to eat at. Which saved us tons of room and worked out perfectly!

What? You don’t have time to separate each color in a MEGA bag of M&M’s.  Neither did I, but soon-to-be 6-year girls love to help!  Once all of the colors were separated we layered them in Mason jars and used the simple jars to hold balloons on the tables.  Super cute and super yummy!! (in case you wondered where all the brown M&Ms went.)

$.20 red bags, rainbow colored tissue paper and simple inexpensive goodies inside. These gift bags were just a cute touch and looked so pretty perched on the window sill (because we were running out of space!!). 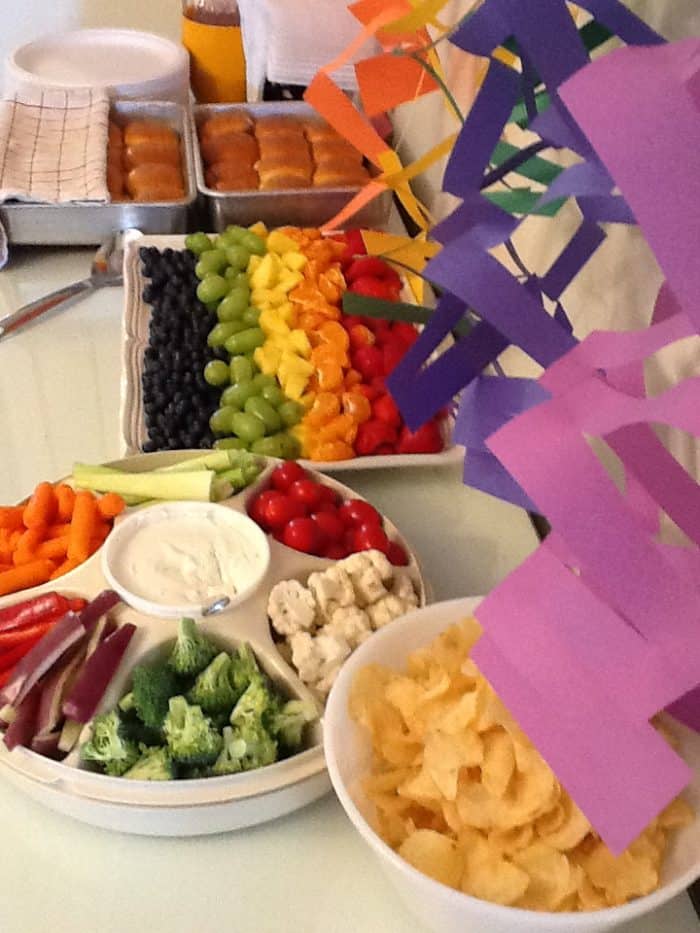 Strawberries, Clementines, pineapples, Green Grapes, and Blueberries made the perfect fruit tray for the party!

My wonderful mother-in-law offered to bring a veggie tray, let’s just say I was thrilled when she showed up with a color-coordinated rainbow veggie tray!  Red peppers, carrots, celery, grape tomatoes, cauliflower, broccoli, and purple peppers were perfect!

Kids love jello, admit it, adults love jello too! It’s just fun food! I made these rainbow stained glass jello squares by following the instructions HERE. Want something easier? Make each color “finger jello” and just cube it up. layer each color in a trifle dish and voila!

A Rainbow Cake is a Must-Have at a rainbow-themed party! Yes, rainbow parties just yell, “MAKE A RAINBOW COLORED LAYER CAKE!” I’m sure you’ve seen them: HERE and HERE oh my!!

If making a cake at home is overwhelming for you, it’s easy to find a rainbow cake or a cake decorated with a big rainbow on top (see the cake we got from Costco above (before they stopped offering them). Walmart and other grocery stores make delicious cakes!

Below are some of the supplies I used for our rainbow Birthday party theme.

So there you have it.  This little girl had one fun 6th birthday, it was all worth it to see her smiling all day!